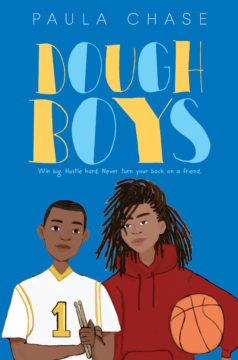 “Fans of Jason Reynolds and Angie Thomas will enjoy this rough and relatable read, whose conclusion provides no easy answers”
– Horn Book Magazine

Win big. Hustle hard. Never turn your back on a friend.

Deontate “Simp” Wright has big plans. Plans that involve basketball and making enough money to get his mom and four younger brothers out of The Cove, their low-income housing project. Long term, this means the NBA. Short term, it means being a dough boy – getting paid to play lookout and eventually moving up the rungs of the neighborhood drug operation with Rollie as his partner.

Roland “Rollie” Matthews used to love playing basketball. But playing with the elite team comes with extra, illegal responsibilities, and Rollie isn’t sure he’s down for that life. The new talented and gifted program, where Rollie has a chance to audition for a professional band, seems like the perfect excuse to stop being a dough boy. But can he abandon his best friend?

In the companion to her acclaimed So Done, Paula Chase follows best friends as their friendship is threatened by the pressures of basketball, middle school and their growing involvement in drug dealing. Dough Boys is a memorably vivid and universal story about the complexities of friendship and choices under difficult circumstances that will appeal to fans of Jason Reynolds, Ghost and Rebecca Stead’s Goodbye Stranger.